Any Time , Any Where , We are ALWAYS Dancing 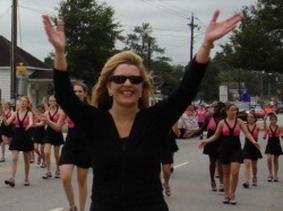 "Miss" Burnadene opened her first studio in﻿ Olanta, SC in 1989.  In 1991 KFA expanded to include a facility in Lake City, in 1995 the Kingstree studio opened and the first Florence studio opened in 1999.  In 2004 a new 6000 square foot KFA studio was built in Lake City.  In 2005 KFA was honored to become the first studio chapter of the National Honor Society for Dance.  In 2007 KFA opened a new studio in Florence which includes 3 large dance rooms equipped with mirrors, barres and state of the art sound systems, as well as 2 large fully equipped gyms.  In 2010 KFA began offering classes in Camden and in 2011 KFA relocated from Olanta to Turbeville.  In 2012 KFA began offering dance classes in Cheraw. In the summer of 2013 KFA opened a new gym in Hartsville. In 2014 KFA expanded to include dance classes in Hartsville.

KFA offers competitive teams at many different locations, including Florence, Lake City, Camden and Cheraw. To be a member of our award winning Dance Company, you must attend summer classes and audition for placement.  The KFA Dance Company travels around the country competing in both regional and national dance competitions.  We also perform for local festivals and special events.  "Miss" Burnadene has taken this group of talented dancers to perform in places such as New York City, Las Vegas, Disney World, and so much more.
﻿﻿﻿﻿﻿click to learn more﻿﻿﻿﻿﻿

Our Lake City, Florence and Hartsville studios have fully equipped gyms, with mats, beams, bars, tumbling tracks, and more.  Each year our gymnastics staff attends the USA Gymnastics National Congress in order to provide our students with the most up to date gymnastics experience.  KFA gymnastics, tumbling and cheer classes are available for ages 2 and up.
click here to learn more about our gym programs

For the recreational dancer who just wants to have fun, make new friends, get some exercise and learn dance all at the same time - we offer tap, jazz, ballet, clogging and hiphop.  So whether you are 2 and love to dress up and play princess or you are 72 and want to show the world you've still got it, we have something for everyone!
Powered by